It’s Friday!!! I’m so excited for the convention. Usually I go with this feeling of foreboding and am totally stressed out. But I don’t feel that way this year. Maybe I’m just too dumb to know better. In any case I’m looking forward to it.

I thought I would try my hand at some live blogging this year. Of course that’s all contingent on having access to wireless at the hotel. If there’s no free internet, no live blog. I’ll try to keep anybody that reads this blog up to date as I go along. One more caveat: there are six game periods, I’m playing in one of them and running games in four of them, so it may be difficult to get around a lot.

1:30 at the Red Lion. Half hour short of the first game period. Here are pics of games being set up. 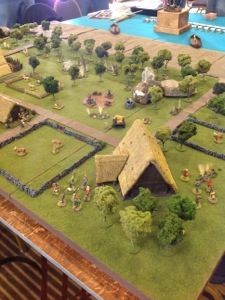 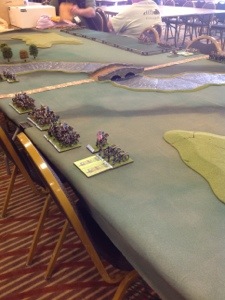 Playing in Chris, Agincourt game. Old friend Kim Harris and I split a command. Unfortunately the English have not covered themselves in glory. Arrow fire has been fairly ineffective, so archers have been driven from their stakes. The French have been un able to totally take advantage of the situation but things are looking bad.