That’s my story and I’m sticking to it. I promised an entry per week and I didn’t get one out last week.  I know I should have something to report but sometimes my real life sidetracks me.  We were on deadline two weeks ago which sucks up a bunch of my free time-about 30 hours per issue- and this week it’s been all about getting my mother in law moved, again.  I didn’t even have a Drumbeat post.  I’ll rectify that now, even though I’m a week behind.

These are pics of Chris Craft’s Hundred Years War game.  Chris has a great approach to his project.  His wonderfully painted figs are all Perry Miniatures.  He, like me, has them mounted on 50mm square bases. Chris, like me, is also searching for a set of rules that work best for him.  This game was played with Hail Caesar rules from Warlord Games. They are fairly similar to Black Powder, which others playing the game had experience with, but I have not played. I was a little late to the affair and so I didn’t get to begin the game as a player and instead I just watched.  The fire system was interesting, in that the resulting fire disordered their targets and forced them to halt.  Even so, the French pretty much survived the bow fire and seemed to easily make contact with the English battle line and eventually routed them.  In all fairness, the Hundred Years War isn’t included in the rules so Chris had to create his own house rules to make the game work.  Still experimenting. 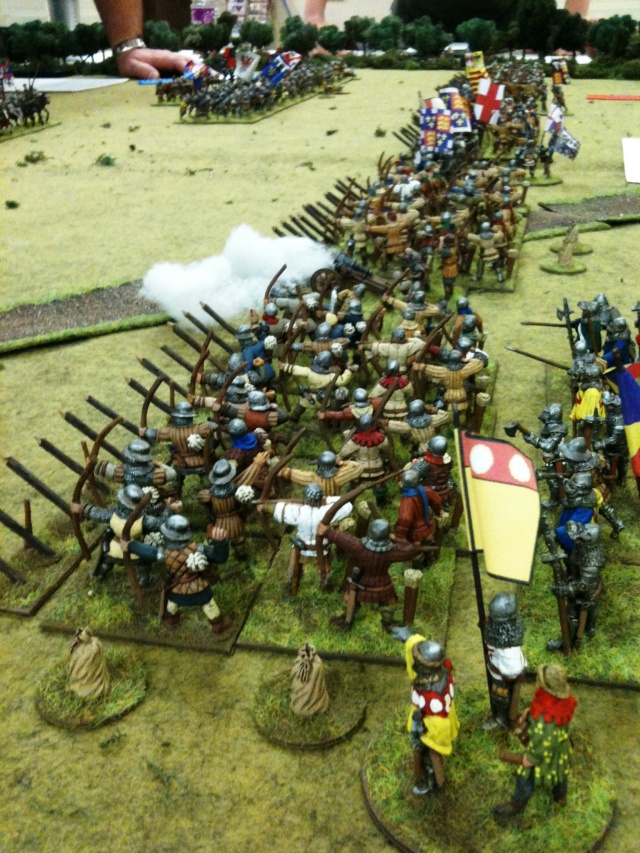 In speaking of the Hundred Years War, I’m still working on those pavisiers. The figs are done, it’s the damn pavises that have got me.  Not painting up very fast and I have mistakes to go back and fix.  On the other hand, I did finally assemble and prime the five guns I need for the War of 1812 militia artillery units.  Hope to have these done by the end of the week.  Maybe the damn pavises too. I’ve also dragged out some of my aging collection of figures from the Irish War of Independence/Irish Civil War.  This is a collection of Cannon Fodder, Musketeer, Renegade and Reviresco miniatures. I’ve ordered a copy of the World in Flames rules by Osprey to at least investigate.  I’m hoping to do some scenario design with that combines role playing and straight skirmish gaming.

Also on the topic of the Hundred Years War, I’m reading a great book, Arrowstorm: the world of the Archer in the Hundred Years War, by Richard Wadge.  Not a super practical read, really more of a social history of the English archers.  Interesting stuff as long as you don’t hope to find the penetrating power of a bodkin arrow at 35 degrees at 150 yards.  This has a little bit about dress, the success of the indenture versus array system of recruitment, and the motivations of those common soldiers that fought in this long, long conflict.

Hope you all are having a fabulous January.  Semester ends on Tuesday, hope to plan a trip to Card Kingdom/Cafe Mox on February 9th.