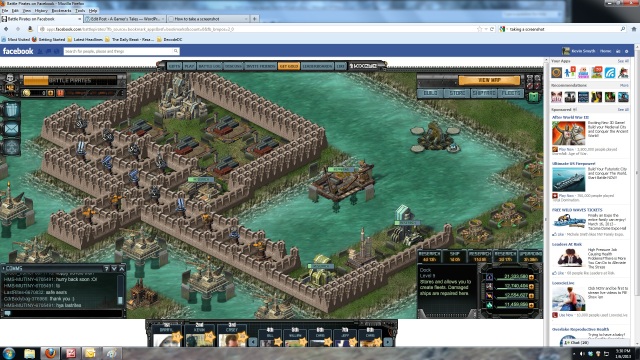 Upgrading and defending your base is an important part of Battle Pirates.

I’ve never been much of a video gamer.  I haven’t owned a video console since the very first Atari, and I didn’t much get into the games my kids were playing on their Nintendos or PlayStations.  There are no Wii’s in my house.  I do have a few computer games, but for the most part I play them rarely.  I knew if I got into a video game it would take me off my miniature wargaming track.

Unfortunately, I’ve been hooked.  As you probably know Facebook proudly announces its free video games online, and since August I’ve been playing BattlePirates.  Though my furor and enthusiasm have been slowly drawing down as I improve my standing in the BattlePirates world, it was so easy to give more time to the game than I should.  First, I love the type of game.  It’s about resource gathering by a variety of different means and balancing production.  A lot of my favorite board games require this, so it was easy to get sucked in.  One can gather resources by “mining” resource points, by attacking the evil Draconian central powers. 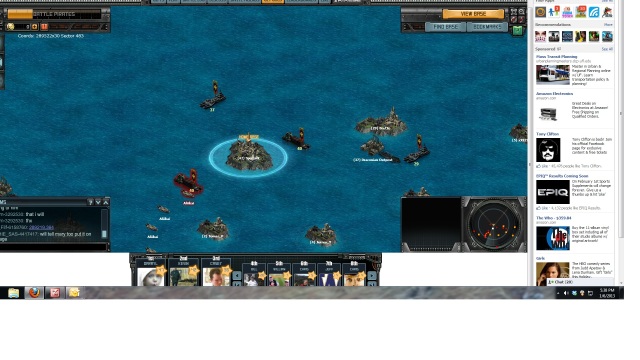 The sea screen. My base is pictured (SpecialK.) The various ships and operations hubs pictured provide risk-filled opportunities to gather resources.

There’s also a combat angle, which I usually find myself at a disadvantage. Every player has a base to defend, as well as means to defend it. Unfortunately, you’re also at the mercy of the 1.2 million players on the web, some of whom want to take what you have.  Fortunately one can only be attacked by players within five levels of you, higher and lower.  So one’s potential enemies are limited. Until you reach level 40 and then anybody can whack you around.  I crossed the level 40 threshold about a month ago and I’ve been visited by more powerful players several times.  Thankfully I built my base well, and I’ve only been really hammered, with the loss of a fair number of resources, once.

In any case, I cop to the argument that Battle Pirates and games like them are a major time sucker.  It’s true. To be fair, however, I’m not the only miniatures gamer I see in the Battle Pirates world.  Bill Vanderpool also has an active account and continues to climb the levels.  The best part of playing, however, is that my son Casey plays.  He’s a great gamer, and is fun to compare notes with.  I’ve learned stuff from him and he’s shared stuff with me.  I probably talk to him on the phone about the game three or so times a week.  That’s time on the phone with him I probably wouldn’t have taken without the game.

However, I’m finding it less of an obsession and am making more time to blog and paint.  My Maryland gunners are nearly finished and I just received the guns for them, so that’s a unit I’ll finish soon.  I’ve also prepped and primed some pavisiers for the Hundred Years War.  They’ll be Paris militia and have some pretty cool markings on their shields, so I’m hot to go.