Tomorrow is the annual NHMGS day at the Museum of Flight.  I’ve written about it many times on my old blog.  It is probably my favorite game event of the year because we’re under an SR 71 in the Great Hall of the Museum of Flight and it’s frickin’ amazing. We have lots of time to rub elbows with the public.  There are lots of games to take a look at.  I get to hang out with Dave Schueler and Mark Waddington.  Oh, and I run the air racing game in the morning.  (Because I schedule the show and keep the list of games, I can schedule my game whenever I please. Bonus.

Air racing is the one semi-demand the museum puts on us for the show.  That and arriving early we get set up before the public arrives at 10:00.  I love air-racing.  It’s a lot of fun.  I have a collection of planes built and painted by Paul Hannah, Dave Schueler and myself.  They are 1/48 scale kits, and the planes look great.  Some are the old Testor’s kits that were introduced by Hawk fifty years ago.  Some are a bit more upscale and include the Minicraft Seversy racer, and I even have a nice resincast Me-209 which was a test bed world speed record holder.  I really like the racers.

Unfortunately they are a lot to transport, and because we have to transport them quite a distance from the parking lot, they can be a lot to schlep.  It will rain tomorrow, and with several trips to get everything in from the car, it will be an unpleasant walk in the weather. Worse than that however, is my constant fear that we’ll have accidents on the tabletop.  Mounted on flight stands 1-7″ tall, the planes become top heavy.  In a crowd, watchers can inadvertently brush them and knock them to the table or the base, and if that happens, it’s over. That happened once at Enfilade with our seaplanes and that was pretty much the show. They haven’t been out of the box since.

Dave and I have often talked about our wish that someone could make the planes in a more manageable scale, say 1/144th.  The racers are relatively tiny at that scale, small, save weight and all that.  John McEwan at Reviresco made a nice mini of the Travelaire Mystery ship ten years or so ago in that scale and I always hoped he’d follow it up with more planes, but none have been forthcoming.  At that size the bases would be heavier than the planes and they’d be smaller to transport though they wouldn’t be quite so eye-catching.  If only they were available.

I was very pleasantly surprised when Dave sent me an e-mail last week with a link to Shapeways.  Shapeways is a 3D printing company that converts designs submitted to them into 3D miniatures.  Lots of game topics, but amazingly one of their designers, Arctic Skunk, supplied them with some air racing designs in 1/144th scale. The Howard Ike and Mike are available.  The Gee Bees are available, models R, Y and my favorite, the Z, and more. I don’t know how they’ll paint up, but they look pretty basic and interesting.  There are pretty close to a dozen planes in the range.  (Don’t get stuck on the category for Golden Age Air Racing, more are available.) They aren’t cheap, though not bad. The smallish Ike and Mike are four bucks, while the bulky Gee Bees are more than twice as much.  Of course, if you want the super detail material instead of the basic white and flexible resin, you pay more.  About three times as much.  I’m pretty sure I’ll stick with the basics and paint in the detail with the help of Mendenhall’s The Air Racer. 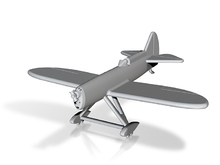 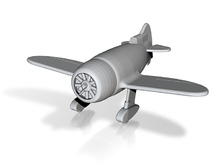